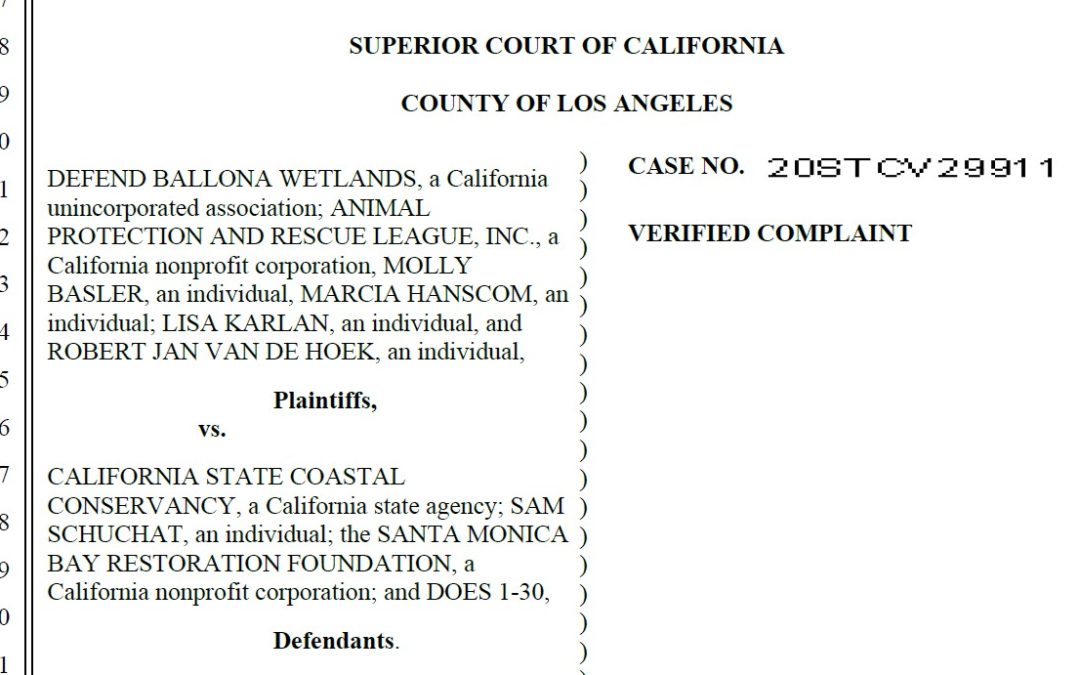 Click here to read the lawsuit in its entirety, Below is the news release that explains who is filing suit to stop the bulldozing of the Ballona Wetlands Ecological Reserve in Playa del Rey, Ca. and why it must be stopped to avoid a wildlife massacre and havoc in LA’s Westside.

A lawsuit has been filed in Los Angeles County Superior Court, alleging the misuse of millions of dollars in public funds for a deceptive plan to bulldoze the Ballona Wetlands Ecological Reserve, thereby destroying the last coastal wetlands in Los Angeles. Thousands of wild animals and plants, currently thriving on the 640 acres, would be obliterated. The bulldozing plan, if carried out, would wreak havoc on the surrounding communities of Playa del Rey, Marina del Rey, Venice, Del Rey, Westchester and LAX Airport for nine years at a cost of 270 million public dollars. The complaint outlines a series of murky connections between the crumbling SoCalGas storage facility that lies under the wetlands, the State Coastal Conservancy, The Bay Foundation, and a couple of high-profile groups supporting this misguided project. “We aim to hold Sam Schuchat and the Coastal Conservancy he leads accountable. The public expects, when we vote on a bond measure, the funds will be spent as the language of the initiative declares,” stated Bryan Pease, attorney for those filing the case.

The lawsuit alleges this “counterfeit ‘restoration’ is a pretext for the real agenda” of aiding SoCalGas in “fixing old and adding new infrastructure.” In fact, “elected officials, fearful of another explosion like the one that occurred at Aliso Canyon, have called for shutting down the facility under the Ballona Wetlands.” Since that massive SoCalGas gas blowout in 2015 is considered one of the nation’s worst environmental disasters, officials are also concerned about the dangers this aging gas storage facility poses to the climate crisis.

“Whether it’s collusion or a mysterious set of coincidences, there are too many connections between front-groups funded by the State Coastal Conservancy, the dangerous gas storage facility under the wetlands and engineering contractors receiving millions of dollars to plan a project that would harm wildlife and their habitat,” stated Molly Basler, a climate activist and a plaintiff on the lawsuit. The litigation centerpiece is the express language in Proposition 12, passed by the voters in 2000, including a specific paragraph stating the funds are to be used to “protect, acquire and restore” the Ballona Wetlands.

Robert Jan “Roy” van de Hoek, a wetlands scientist and wildlife biologist, explains that millions spent do not comply with the bond measure’s language. “The lawsuit quotes two restoration and historical ecology experts who state unequivocally that the latest science proves the project pushed by The Bay Foundation
is not a restoration,” explained van de Hoek.

Lisa Karlan, a co-founder of the community association
DefendBallonaWetlands.org, emphasized the importance of ensuring no further funds
are misspent.
“We want a forensic audit of these funds. We want the misspent money
returned, and no more public money expended on this boondoggle. We hope Governor
Newsom is listening,” said Karlan.